Last year during lockdown I took a trip to Southwick Hill (blog here) to look for grassland fungi on this Downland site on the edge of the city of Brighton & Hove. It looked promising, so I returned this week with members of Sussex Fungus Group to undertake a grassland fungi survey, with permission from the National Trust who look after this site.

The first mushrooms we came across were (I think) Fools Funnel Clitocybe rivulosa. It has a sort of powdery ('pruinose') covering on the cap, which gives it a slightly different look to various other beige mushrooms we saw today. 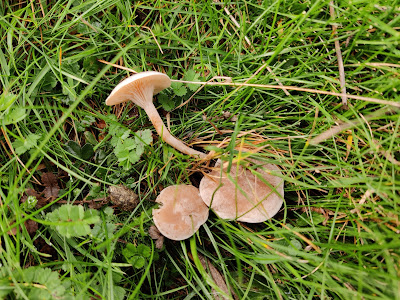 We got a nice set of beige waxcaps: 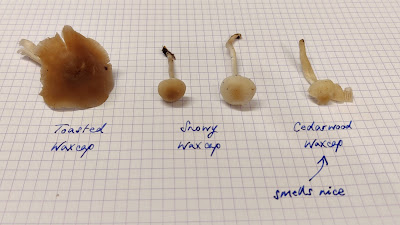 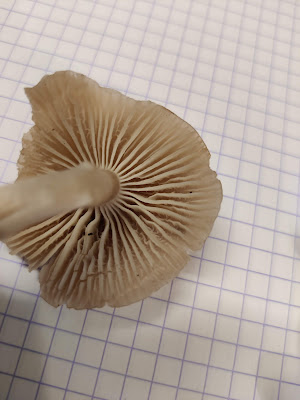 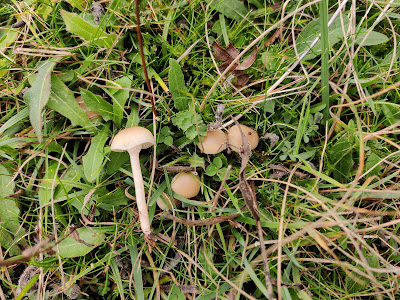 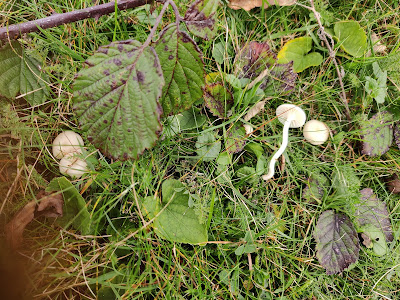 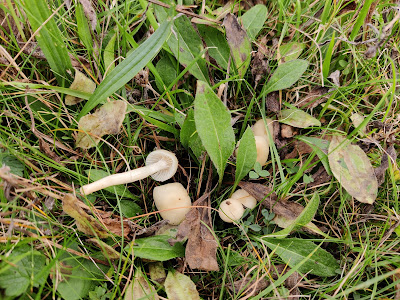 We also found a couple of BIG beige mushrooms. I think this one is Slender Parasol Macrolepiota mastoidea, based on the texture on the stipe and the presence of a thin ring which it was possible to slide up and down the stipe. But I must admit I'm not 100% sure what the separating characters are between this species and other 'Parasol-like' species, such as M. excoriata. 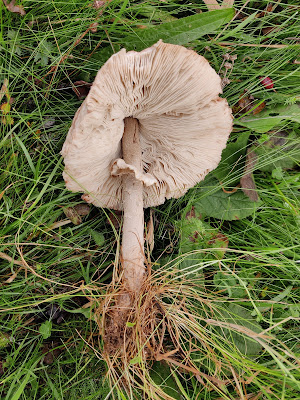 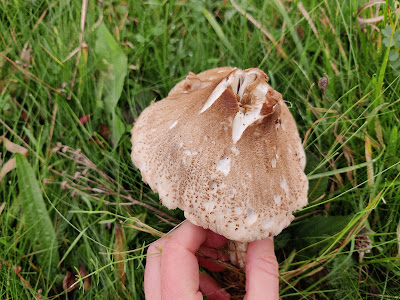 The mushrooms weren't all beige. We also found some fresh young Yellow Fieldcaps Bolbitius titubans (I wrote a blog about my first encounter with this species, here).

There was a brown Entoloma, with a kind of silky sheen to the cap, which I was very tempted to call Entoloma sericeum and leave it at that. 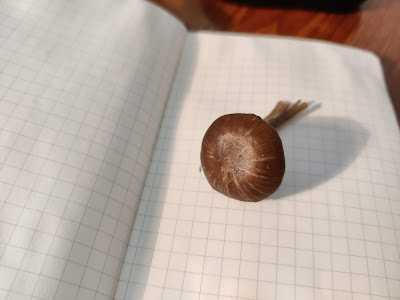 This rather dried-out yellow-brown coloured bonnet had me stumped at first, but I think it's Brownedge Bonnet Mycena olivaceomarginata. My Mycena book (by Aronsen & Læssøe) talks about the gills being "basally interveined in age", which they are — very much so — here. 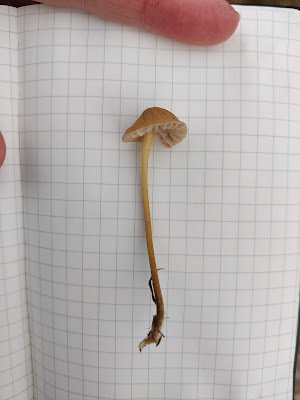 The gills look almost deformed — is this how Mycena olivaceomarginata normally looks, or is something else going on here? It's got the brown edge to the gills anyway. 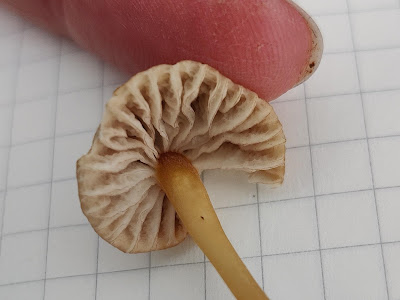 Next up, not a genus I'm very familiar with, but I think this is a Melanoleuca species. I could do with some more guidance on this one, there seem to be lots of quite similar-looking Melanoleuca species? I find these ones hard to get excited about, if I'm honest. 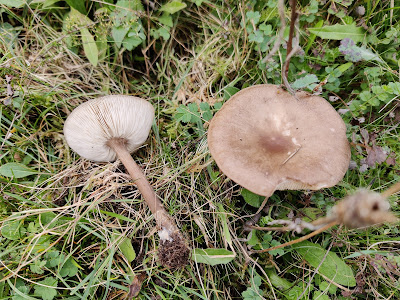 When you get to the part of the site where the A27 runs under Southwick Hill, there is an area of shorter grassland which looks like its been more tightly grazed by rabbits. This seemed to be the richest part of the site, in terms of the diversity of grassland fungi. As well as Snowy Waxcap C. virgineus and Cedarwood Waxcap C. russocoriaceus here, we found some non-beige waxcaps! 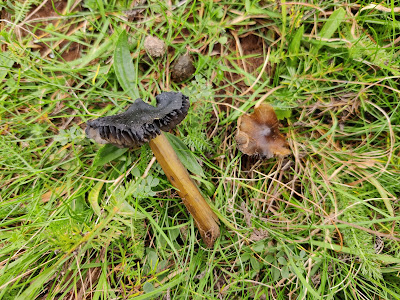 Spangle Waxcap Hygrocybe insipida (noting the reddish top to the stipe). Very smol! About 5mm across. 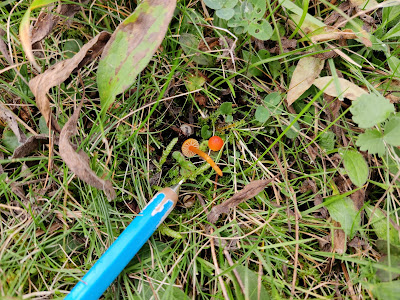 Meadow Waxcap Cuphophyllus pratensis. Unfortunately it looked like somebody had trodden on these shortly before we got to them, but they're still showing that fresh apricot-orange cap colour nicely. 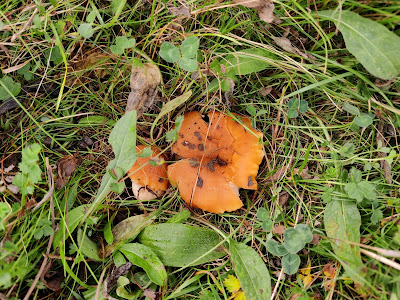 We were rather puzzled by these fragrant-smelling grey-brown mushrooms. Now I'm wondering if it's Spotted Blewit Lepista panaeolus... (I'm waiting for it to give me a spore print.) 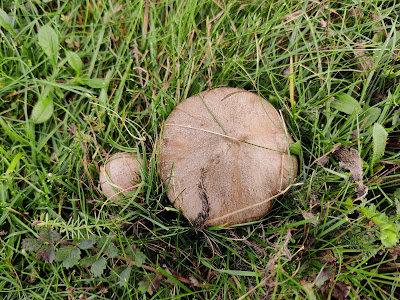 I'm drawing a complete blank on the next lot of beige mushrooms. I think I was beiged-out by this point. 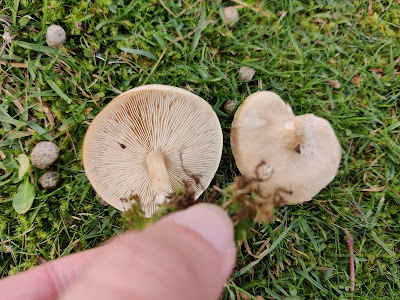 This patch of Meadow Coral Clavulinopsis corniculata was very nice to see. 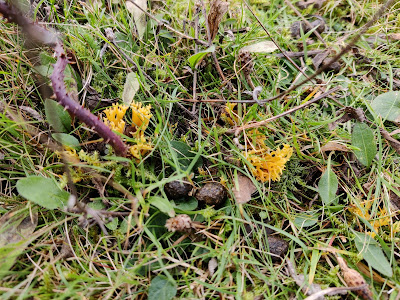 Elsewhere on the site we came across a few patches of yellow spindly-club-type things. I think these are one of the yellow Clavulinopsis species (perhaps Apricot Club Clavulinopsis luteoalba, but I think they're microscope jobs to be sure). 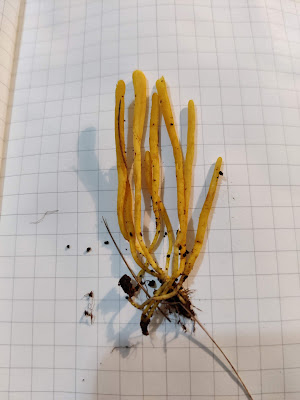 We also saw the remains of various puffballs. I thought perhaps the tall ones were old Meadow Puffballs Lycoperdon pratense and the smaller round ones a Bovista species (you can see the remains of an outer case on the specimen on the right). But I'm not sure if I've got enough for a species-level identification here. 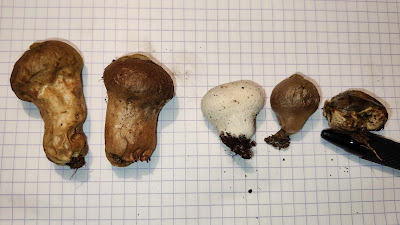 And, an added splash of colour! An orange rust fungus on Salad Burnet. Perhaps Phragmidium sanguisorbae? 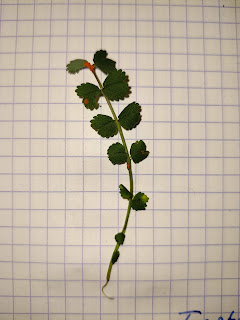 Records will be entered into iRecord in due course.