I joined Sussex Fungus Group for a foray at Butterfly Conservation's Rowland Wood reserve on Sunday. When we originally programmed it in, I wondered if it might be a bit early in the season to see much of interest. But I needn't have worried: it was all kicking off!

As soon as we arrived, we saw that the area to the right of the main track into Rowland Wood was dotted with orangey-apricot coloured mushrooms enjoying the woodchips that had been left there from a previous visit by Mr Mulcher: False Chanterelles Hygrophoropsis aurantiaca. 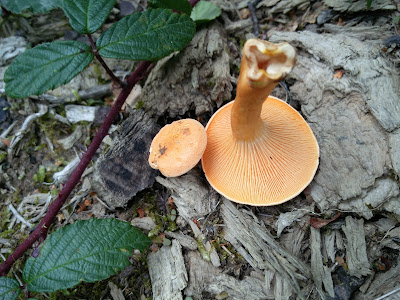 The repeatedly forking gill-like structures underneath the cap are a distinctive feature of this species.

As we got into the rushy clear-felled area, we were momentarily distracted by the odd Common Lizard scampering about and the egg-sacs of a departed Wasp Spider, which Mark Colvin got this wonderful photograph of:

But this area provided fungal interest too, as it was dotted with tight clusters of Ringless Honey Fungus Armillaria tabascens. 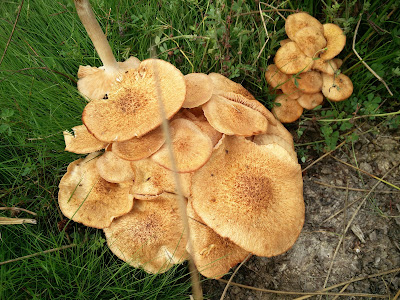 From there we headed north into an area of mixed broadleaf woodland, which is where things started to get serious.

At the edge of the path, under hazel, we came across this brown milkcap. I don't really like tasting mushrooms but am willing to give it a try, under supervision, as taste can be a key feature in certain groups of mushrooms. I put a tiny dab of milk from this mushroom on the tip of my tongue. 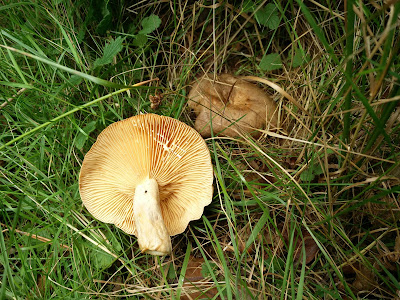 IT WAS SO HOT! Like, HOTTER THAN THE HOTTEST WASABI I'VE EVER HAD!

That gave us an ID on this mushroom: Fiery Milkcap Lactarius pyrogalus.

All through the wood, the floor was dotted with these dirty brown mushrooms: Blackening Brittlegill Russula nigricans. I don't think I've ever seen mycorrhizal mushrooms growing in such profusion before. 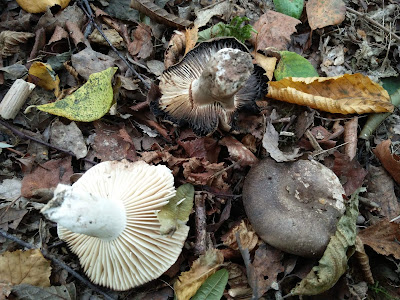 These, if I recall, smelt kind of bad. And we had a conversation about exactly what the bad smell was. Dead crab? They were living up to their name: Stinking Brittlegill Russula foetens. 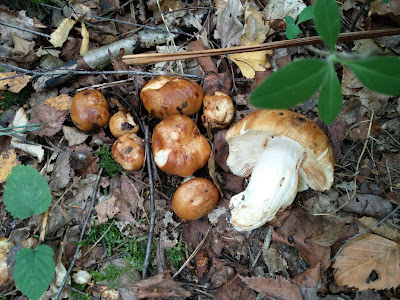 Underneath an oak tree we found some more attractive milkcaps. I think Nick Aplin identified these as Oakbug Milkcap Lactarius quietus. 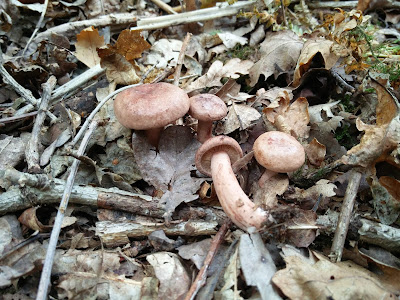 Then another nice milkcap, looking like someone turned it on a potters' wheel (if it didn't have that dink in it). I think this one got recorded as Stumpy Milkcap Lactarius flexuosus var. flexuosus. 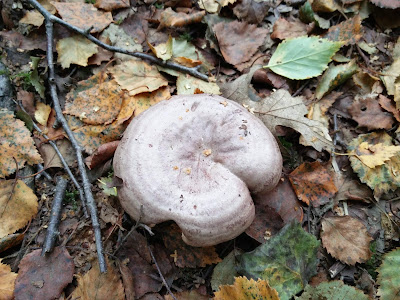 I didn't recognise this bolete right away. Maybe I was too busy exclaiming, "Look how big it is!" and taking pictures of me pointing at it. 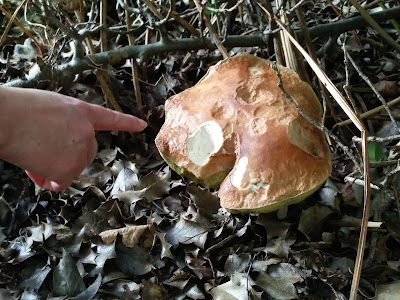 But it turned out to be a Penny Bun Boletus edulis. I should have known. 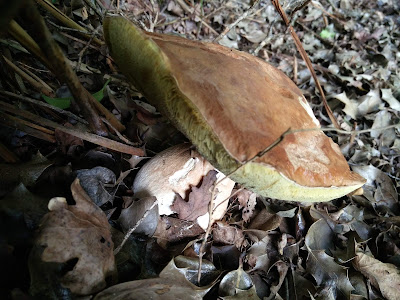 These pale mushrooms were a bit of a mystery until we gave them a sniff, at which point Nick Aplin recognised their smell of 'sweet rubber'. They gave me a flashback to primary school and the smell of plimsolls and country dancing: Sweet Poisonpie Hebeloma sacchariolens. 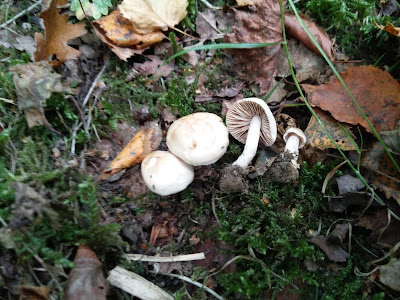 It struck me that mycology demands a lot from people. It is not enough to recognise colours, shapes and textures. You have to observe with all your senses, and delve into the depths of your brain for memories of things and their unconsciously remembered scent.

Stepping out of the wood, we stopped for a while at an old fire site, near the Big Beech Tree. Here we found a couple of small ascomycetes which Nick Aplin has identified as Charcoal Goldeneye Anthrocobia macrocystis and Plicaria carbonaria, with the latter being possibly new to Sussex. 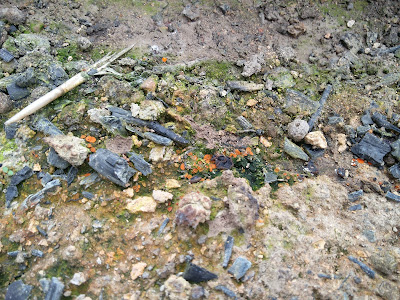 Nick and Mark got set up to get some proper nice shots of the ascos, so hopefully we'll get to see those some time. And Brad found some interesting moss – more of that on his blog.


From there we headed over to The Big Beech, which has been a favourite haunt of mine on previous solo forays. On one of its dead limbs, hidden amongst the bracken, we found an impressive display of Oyster Mushrooms Pleurotus ostreatus. 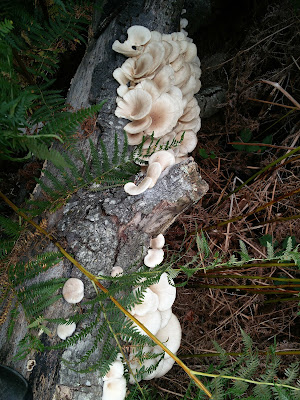 A log pile nearby was home to a nice fresh Blackfoot Polypore Polyporus leptocephalus. 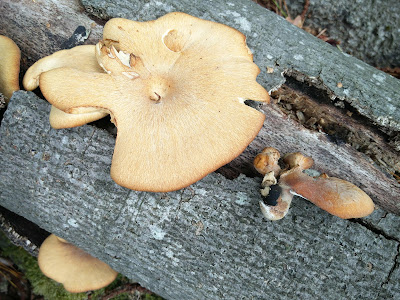 And amongst the grass at the edge of the ride we found two Blushing Boletes Leccinum scabrum. The flesh of these mushrooms didn't change colour when cut, so I'm not sure the name 'blushing' bolete is that helpful. I think I preferred Brown Birch Bolete. 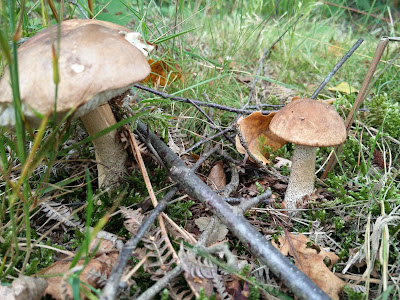 I thought the wide mulched ride along the western edge of Rowland Wood might provide some excitement, but it was very dry and we found very little.

As we reached the edge of Park Corner Heath, and the old earthen bank which marks the parish boundary, we came across a Beech tree which was playing host to a very healthy looking Ganoderma and Giant Polypore Meripilus giganteus. That's probably not good news for the Beech tree. 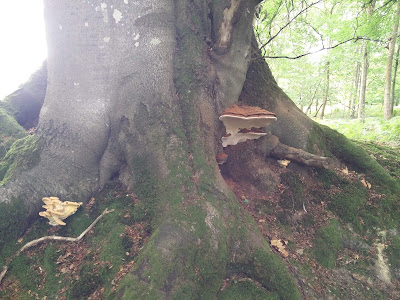 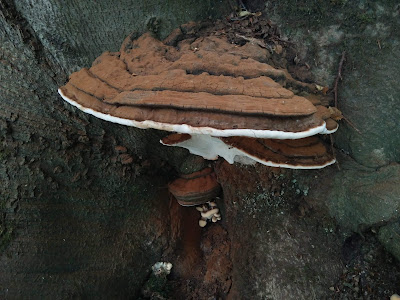 Time was against us by this point, but we managed a quick scoot along the edge of the pond on Park Corner Heath.

I'm not sure if we got a name for these small scarlet mushrooms...? But I liked them. 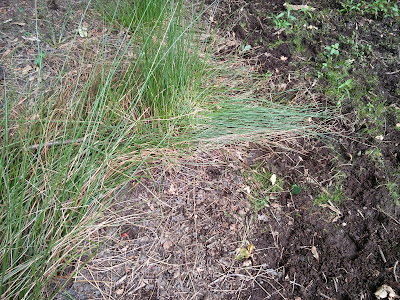 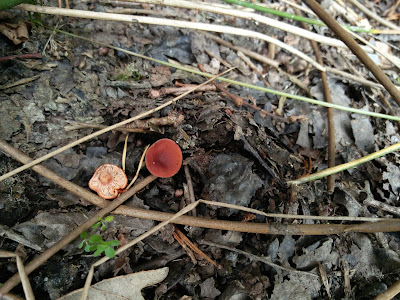 And we almost missed this white mushroom, buried in the leaflitter. I think we recorded this one as Milk White Brittlegill Russula delica. The orange patch in the picture is where I've rubbed it with an iron sulphate crystal, and shows the FeSO₄ reaction which can be a key feature when identifying Russulas. 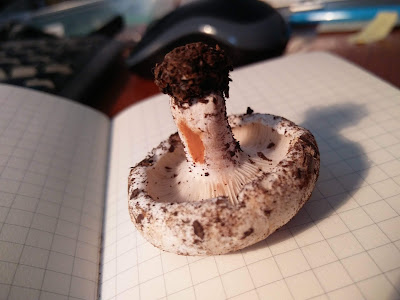 Those were really just the highlights. The full list is available via the Sussex Fungus Group e-group, should you care to join! And all records will be shared with Sussex Biodiversity Record Centre.

That would have been the end, except I couldn't resist stopping for these Inocybes which I spotted on my way back to the car. I've added them to my little pile of Inocybes that I'm going to look at under the microscope one day. When I haven't got anything else to do. 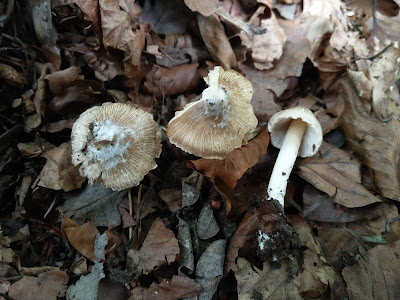 All records to be submitted via Sussex Fungus Group
Posted by Clare Blencowe at 14:12