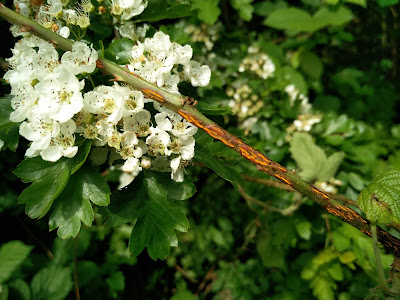 Bramble Rubus fruticosus agg. hosts a few species of rust fungi but, as far as I know, only one which looks like this. These longditudinal pustules are the uredinia (stage II) of Kuehneola uredinis. 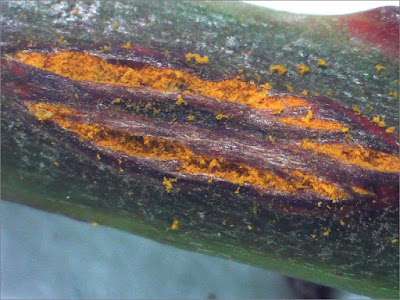 The UK species inventory lists its preferred common name as Pale Bramble Rust, with Bramble Stem Rust also in use. But they're both rather unsatisfactory. At this stage in this species' life cycle you can see it's very much not 'pale'. And at other stages of its life cycle you'll find it on growing on the bramble leaves, not the stem. So I'm inclined to forget the common name for this one.

I think you can get away with identifying this species from its field characters, but I did have a look at the uredospores. 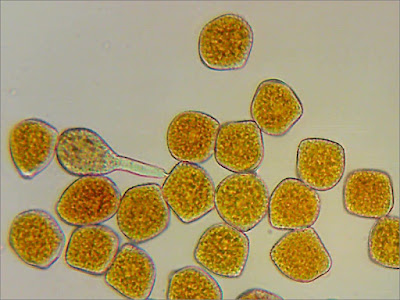 I think this is what they're supposed to look like! I guess that's an immature one on the left, with a stalk still attached?

OK - turns out this one isn't quite as easy as I thought. Apparently Phragmidium bulbosum can also look similar in the field and occur on bramble stems.

Differences between P. bulbosum and K. uredinis sound rather subtle to me (with reference to Dutch Rust Fungi).
Is that stalked thing in my image above a paraphysis? I'm inclined to think it's a spore; I saw reference in Wilson & Henderson's 'British Rust Fungi' to Phragmidium spores being "borne single on pedicels" - so perhaps the stalk-looking thing is a 'pedicel'?
This is the best illustration I can find of that distinction:

Incidentally, Grove (1913) seemed to have a completely different view on what K. uredinis spores look like. 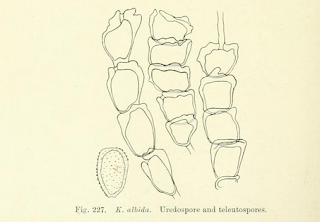 The Plant Parasites of Europe website has images of K. uredinis uredospores (here) but no comparable photos for P. bulbosum.

I got this other micrograph of my collection, which shows something spotty, i.e. a 'verrucose' or 'echinulate' uredospore? I don't know why it's clear (hyaline) – did the fungus produce an empty spore for some reason? Maybe the other ones look like this too but you can't see the details of the uredospore wall usually, against the orange contents...? 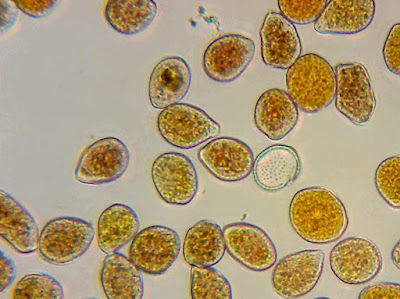 OK - so I feel like I left this one kind of unfinished... And the help I received in the comments here and via the British Mycological Society Facebook page have spurred me on to have one more look at this bramble stem rust.

Brian Douglas let me know that the paraphyses of Phragmidium should look something like this. And I was advised to look at a cross-section through the stem rust pustule, to have a proper look for them. So that's what I did. Here is a shapshot from one of the cross-sections I looked at. 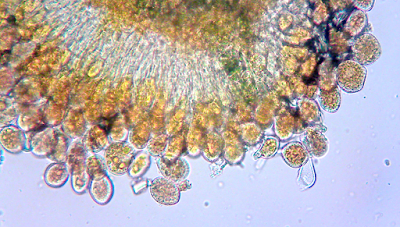 I'm now pretty sure my collection doesn't have paraphyses. So I'm going with an identification of Kuehneola uredinis.

I've learned a few other things along the way. The clear structure I was talking about earlier is a dead spore. You can see another one in the image above.

The growing spores are held on a stalk called a 'pedicel' - and that is what I was looking at in my first micrograph.

Email ThisBlogThis!Share to TwitterShare to FacebookShare to Pinterest
Labels: Home and garden