Something in the flowerbed

Something caught my eye as I walked up the garden path this evening. Something in this flowerbed:

In preparation for planting a row of young Blackthorn whips here last winter, we'd dug a barrow-load of peat-free compost into this bed. And, following a few heavy April showers, it seems this compost is providing some prime habitat for another species...

This cup fungus has sprung up all along the length of the bed: 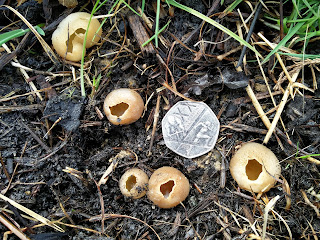 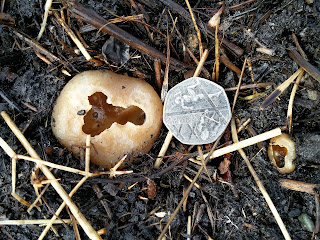 The fruiting bodies vary in size from about one to five centimetres across and all share this rounded shape, with a narrow opening at the top. The upper surface, around the opening, is ever-so-slightly pimply-looking; like it's got little brown goosebumps. When you break it open, the inner surface is the same colour as the outer surface, but forms a separate layer with a slightly smoother texture.

It doesn't have much of a stem to speak of. 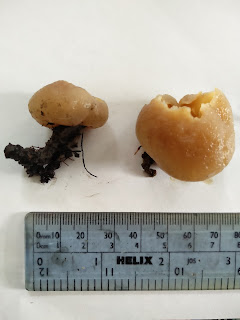 Having consulted with the Collins Complete (photographic) Guide and the Collins (illustrated) Fungi Guide, I'm going to take a punt on this being Blistered Cup Peziza vesiculosa: 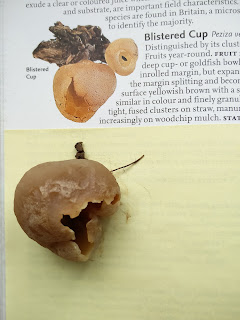 "Distinguished by its clustered, blister-like growth. Fruits year-round. FRUIT BODY To 8cm across; initially deep cup- or goldfish bowl-shaped with a strongly inrolled margin, but expanding to saucer-shaped with the margin splitting and becoming ragged or blistered; inner surface yellowish brown with a smooth texture; outer surface similar in colour and finely granular. HABITAT Typically in tight, fused clusters on straw, manure, compost and rich soil, and increasingly on woodchip mulch. STATUS Widespread and common."