It's fairly common knowledge among the volunteers involved in managing Butterfly Conservation's Park Corner Heath and Rowland Wood reserves, near Lewes, that one of the visual treats you can look forward to here, as Winter turns to Spring, is the fruiting of the Bog Beacon Mitrula paludosa.

As the Brimstone butterfly emerges from hibernation to patrol the woodland rides, looking for a mate, the Bog Beacon arises also, in the dampest places, to put on its own reproductive display. We saw crowds of them this morning along the stream which borders the southern edge of the plateau at Park Corner Heath (pictured above).

Over the years Butterfly Conservation volunteers have put in several small dams to slow the flow along this stream and create a series of small pools. The work was done primarily to improve the habitat for dragonflies and damselflies, but seems to have also created ideal conditions for Bog Beacon.
Over in Rowland Wood there's another site where the Bog Beacon reliably appears – a particularly wet ride which runs between the lake and the Big Beech.

And here's a little gang from that Rowland Wood population, up close: 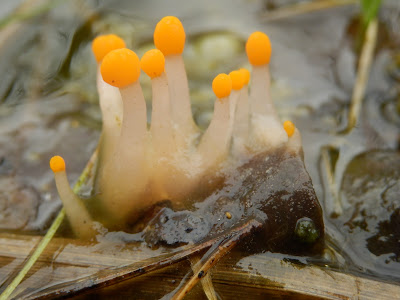 Being new to recording fungi, I tend to assume that if *I've* managed to find and identify a species, it's probably something fairly common. So I was surprised to discover that, while this species does feature in the Collins Complete (photographic) Guide, it doesn't get the slightest mention in the Collins (illustrated) Fungi Guide – although the latter does include a selection of "the more common, conspicuous, large, interesting and/or distinctive" ascomycetes.

Well, this looks pretty conspicuous, large and interesting to me – so perhaps it's been left out because it's not very common?

I looked on the British Mycological Society's FRDBI database online and it includes only two records of M. paludosa from East Sussex: One from Vert Wood (part of the same woodland complex as Park Corner Heath & Rowland Wood) in 1967; and one from Chelwood Gate in 1979. But the species must be more widespread than the FRDBI records suggest because Googling "Bog Beacon Sussex" brings up a bunch of other records and photographs of this charismatic species.

Worth sticking the record in then!

After picking up my new fungi books last Saturday, we drove over to Counters Gate near Goodwood for a walk up through the woods of Eastdean Park / Charlton Park – heading in the direction of East Dean.


Walking through the coppice woodland (SU8911) the first fungus I came across, growing on hazel, was this: 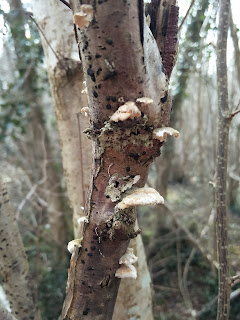 Not a very good photo, but it's a pale, thin bracket fungus – velvety on top with pores on the underside. In a radical break with tradition, I'm not going to say, "Yeah, I think it's Turkeytail." My guess is this is different Trametes species – either T. hirsuta or T. pubescens (if only I knew how to tell the difference).

I'm in a similar fix with this next one. It's the same sort of colour as the previous fungus but has a flatter and smoother fruiting body, and is considerably less hairy. Perhaps this is T. pubescens and the one above is T. hirsuta. They're similar species apparently, but T. pubescens is more "finely silky or velvety". 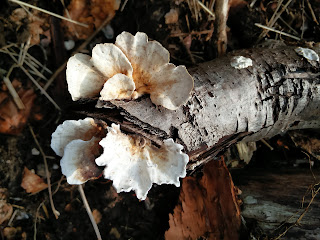 And then a few I think I can do...
The next one puzzled me for a moment, because it was growing in this ear-like form, similar to Jelly Ear Auricularia auricula-judae, but almost black. I think it's actually another example of Witches' Butter Exidia glandulosa; the Collins (illustrated) Fungi Guide says the fruit body is "initially cup- or ear-like" and then grows into the distorted forms I've seen before. 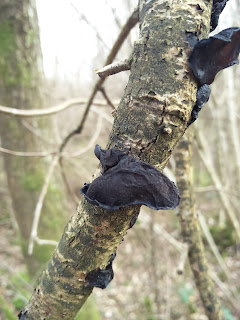 The path eventually comes out into a clearing surrounded by mixed woodland of Beech and Oak (SU8912).

This great windblown Beech looked to be providing some excellent fungi habitat... 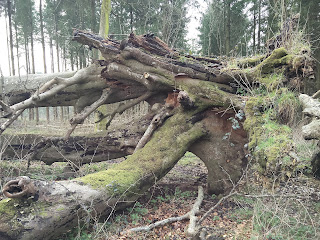 ... including for this bracket fungus. I reckon this is a Ganoderma but there are several that look alike and are much confused: Artist's Bracket G. applanatum and Southern Bracket G. australe being the two which are most commonly found on Beech. There's also the Beeswax Bracket G. pfeifferi which apparently has a resinous or waxy surface that can be "melted with a lighted match". So, something else I should be carrying around in my bag of fungi-hunting apparatus – a box of matches. 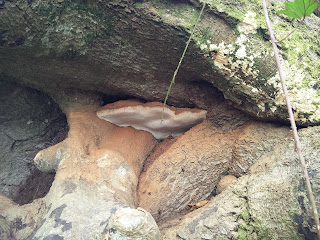 I got quite excited about finding this rich brown crust fungus, growing on Oak, as I think it's another new species for me: Oak Curtain Crust Hymenochaete rubiginosa. 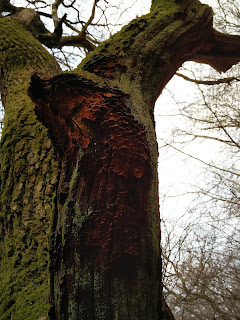 It was growing above head height and the light was low, so another terrible photo... 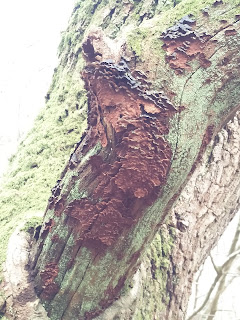 ... but you can see it's growing tightly against the wood where the bark has come off and forming tiers of overlapping brackets, which is right for H. rubiginosa. The book says you should be able to see "fine bristly hairs" on the upper surface, with a hand lens, but I can't.

I also saw lots of this going on – another crust fungus the colour of my spare room. I was hypothesising the other week that this might be a Peniophora species. But I've got a new theory this week. The Collins Complete (photographic) Guide says that Glue Crust Hymenochaete corrugata can look similar to resupinate species of Peniophora, so maybe it's that. 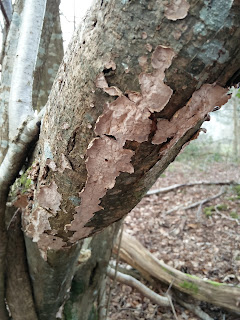 Gonna need another bigger book for all these resupinate characters! As well as some microscopy skillz.

A few weeks back, after I'd spent much of an afternoon struggling to identify a mushroom I found at Park Corner Heath (which I eventually concluded *might* be a Psathyrella species), I asked Martin Allison, the Sussex County Recorder for Fungi, how one goes about putting a name to a species such as this: 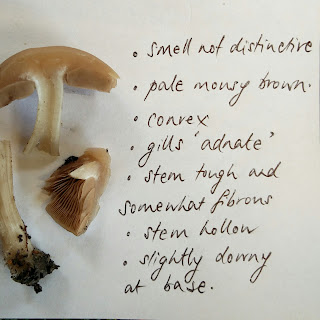 Imagine then my disappointment upon discovering that Funga Nordica is out of print, sold out everywhere, and IMPOSSIBLE to get hold of.

Some weeks later, I received an email from another Sussex mycologist, Howard Matcham, who said he's been enjoying reading this fungi blog and, as he is focussed on studying other, even-more-obscure, forms of life these days, asked if I would like to have his copy of Funga Nordica – to give me "a nice start in my mycological career".

Of course I replied, "YES PLEASE!".

And that wasn't it: Howard also had a copy of Collins Fungi Guide he was offering to give me – the illustrated one. This too had been on my wishlist ever since it was recommended to me by Graeme Lyons, as I gather it includes more comprehensive coverage of all the UK species than my other field guides.

My cup runneth over! And my bookshelves are runneth-ing over too, so I've had a bit of a re-organise. Here is my new "Mycology" section: 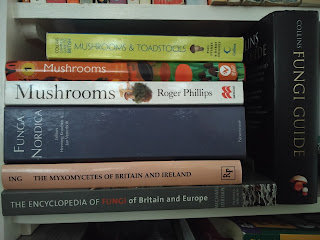 Posted by Clare Blencowe at 10:53 No comments:

To Haslemere today for lunch and, amazingly, after a particularly delicious plate of roast lamb and a glass of beaujolais (pronounced "bow - joll - iss" by Dad, because he has a reputation to maintain), I managed to convince my dear parents that they would REALLY like to spend Mother's Day afternoon wandering around Marley Common, looking at bits of dead wood.

Yes, Reader, I hail from Over The Border: Haslemere. Nestled up against Surrey's boundary with Sussex and Hampshire, people from Haslemere reach parts of Sussex that the Sussex-dwelling folk don't tend to get to very often. And so it was today: We headed south, out of Haslemere, to Marley Common. To Sussex! And the site of one of my earliest fungus forays.

In truth I never went 'up Marley' very often when I was growing up in Haslemere. Because, for a walk, it's just not quite as good as Black Down. But apparently it is rather good for fungi; so I've got a feeling I'll be spending a lot more time here in future...

We saw various aged bracket fungi which I moved swiftly past because I still have no idea what I'm doing with bracket fungi (other than saying, "yeah, I think it's Turkeytail," repeatedly, upon encountering almost every bracket fungus I see).

I attempted to impress Mum by showing her what-I-think-was Peniophora quercina, but she just thought it looked like a bit of dead bark. And I'm not sure excitedly pointing out that it was "SLIGHTLY CRAZED!" really convinced her of its fungal nature.

She was fairly impressed with these though. More tiny red beads! 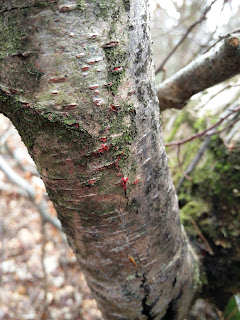 I'm going to go out on a limb here and say these may be the anamorph of another Nectria-like species – like what I found (and misidentified) in Hoe Wood the other week. It was growing on one of the upright branches of this fallen (birch?) tree: 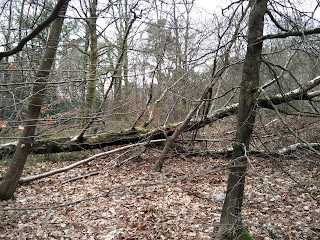