A quick scoot round Sullington Warren

Went to Sullington Warren, West Sussex, with some friends the other day. Never been to this site before and with its mixture of heathland, birch and coniferous woodland it made an interesting change from the deciduous woodland sites I usually poke about in locally.

The woodland floor was littered with conifer cones and, after seeing some similar specimens on the BMS Facebook page, I think these must be Conifercone Cap Baeospora myosura. I had a quick look down the microscope, and this collection has very small (3-4 μm) elliptical spores which would be right for this species. I've learnt that the generic name 'Baeospora' means "little spores". 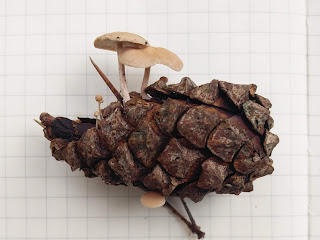 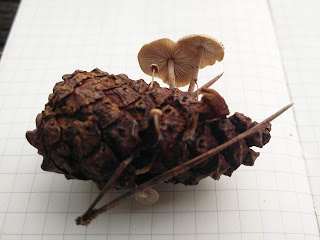 This blue-ing Leccinum was a treat. I've been wanting to see a Leccinum with this character for ages. I normally just see boring old Brown Birch Bolete Leccinum scabrum (or that's what I call them all, anyway).

This collection had a somewhat scabrum-like cap colour, with orangey-brown tones, but that species never goes blue. 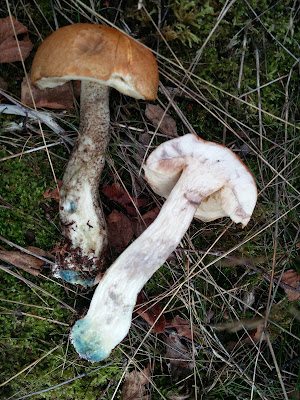 This collection took a couple of minutes to change colour in the base, but it was really quite impressive once it did. The brilliant colour reminds me of my Windsor & Newton drawing inks: something between Viridian and Ultramarine. 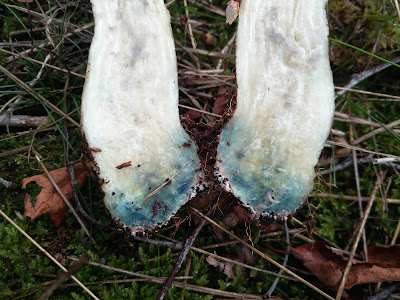 I got some help from Andy Overall and others over on the BMS Facebook with identifying this one. There are a few different species of Leccinum which can display this kind of colour change, but Orange Birch Bolete L. versipelle is the only one which typically has these orange tones to the cap.

On the heathland, we saw some lovely Laccarias. I think these are most likely Scurfy Deceiver Laccaria proxima; but I haven't checked the spores to make doubly sure it's not just L. laccata. 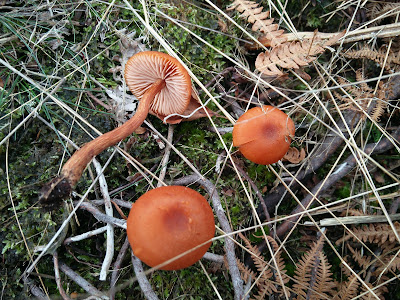 I joined the Natural England Field Unit in late October for three days of grassland surveys in the High Weald. I was there in search of waxcaps, of course. And wasn't disappointed!


We'd landed in the High Weald during a veritable waxcap extravaganza. Mushrooms everywhere.

The photos above include most of the waxcap species we came across, but we also saw Glutinous Waxcap H. glutinipes, Cedarwood Waxcap C. russocoriaceus, Goblet Waxcap H. cantharellus and Yellow Foot Waxcap C. flavipes, bringing the total number of waxcaps recorded over the three days to, I think, 19.

It was just fantastic to see so many specimens and be there with an experienced waxcap grassland surveyor, Andy McLay, who was able to explain the variation these species typically display.

With so many mushrooms around, I was wowed at almost every step. Even the common species that I thought I knew provided a few bamboozling moments, like these almost all-yellow Parrot Waxcaps G. psittacinus.


I scarcely believed Andy when he told me these were Parrots but sure enough, after digging around in the grass a bit, I found some sheltered specimens still showing their characteristic green tones.


It was a nice surprise too to encounter Bitter Waxcap H. mucronella and have a chance to experience its bitter taste, which you can get by just touching the cap to your tongue.


There are lots of little red waxcap species, so the taste is a key identification feature with this one.

And I never cease to be intrigued by the variability of the Blackening Waxcap H. conica s.l....

... I look forward to finding out what molecular studies make of these guys.

But the biggest surprise for me was how much I enjoyed the Entoloma species we encountered. I must admit I've been inclined to ignore anything that looked Entoloma-ish; thinking they're all brown dull-looking things and almost impossible to identify. But Andy McLay found some crackers on our High Weald surveys.

This was one of the stars of the week's surveys: something from the Entoloma bloxamii complex – one of those big blue pinkgills. Growing in a hay meadow. 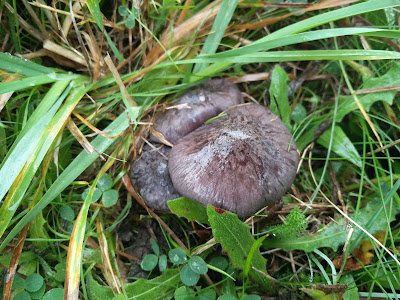 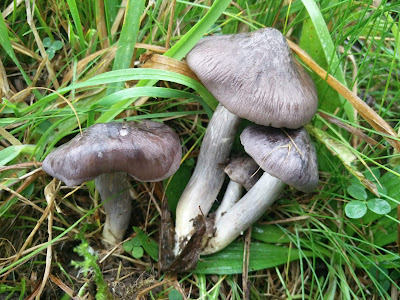 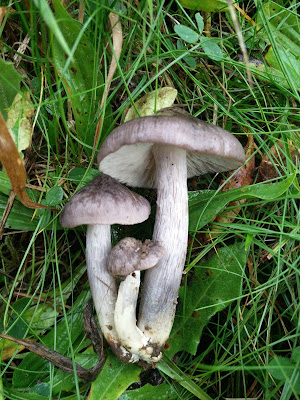 I remembered seeing an article in Field Mycology on these, called 'Big Blue Pinkgills' (Ainsworth et al, 2018). Recent combined molecular and morphological studies have led to four such species now being recognised in the UK.

I got a spore print, so I could measure mature spores from our collection. I've never seriously measured Entoloma spores before: their angular shape makes it quite tricky. And I had to do a bit of hunting around to find spores showing nicely in profile view.

After reading the descriptions in Ainsworth et al (2018) and consulting with Brian Douglas from the Lost & Found Fungi project based at Kew, I think this collection fits best with Entoloma atromadidum. Will see if we can arrange to get it DNA sequenced, to confirm.

And another proper stunner, growing in grazing pasture: Lilac Pinkgill E. porphyrophaeum. This is a big mushroom!

The coarsely fibrillose texture of the cap is, as I understand it, a distinctive feature.

Coming down in size, we saw lots of Mealy Pinkgill Entoloma prunuloides. This had a distinct farinaceous (floury) smell.


The new Fungi of Temperate Europe book describes it as 'compact' which sounds about right for our collection.


This was another new one for me: Blue Edge Pinkgill Entoloma serrulatum. Just gorgeous midnight blue tones to the cap and stem, and along the serrated gill edge – a key characteristic of this distinctive species.


This Indigo Pinkgill Entoloma chalybaeum had similar greyish-blue tones. But if you look closely, the gill edge on this one is concolourous with the rest of the gills.


The combination of a dark cap and stem, which appeared quite black in the field, with purely white gills, led to an ID of Crow Pinkgill Entoloma corvinum for this next one.

Reading through the literature I've got at home (Fungi of Temperate Europe and Funga Nordica), I've got a bit confused about how you tell E. corvinum apart from some of the other dark-capped, pale-gilled species. 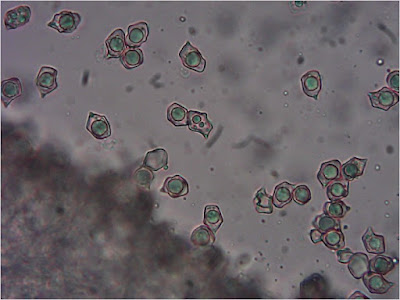 I gather the presence of cheilocystidia is a feature which separates E. corvinum from some macroscopically similar-looking species. But I can't find any decent pictures showing what the cheilocystidia would look like if they were there, so I've given up on trying to ascertain if this collection had cheilocystidia or not. Let's assume that it did.

The features were getting even more subtle on this Entoloma infula, but if you catch it in the right light you can make out the concentric undulations on the cap, appearing as slightly darker concentric circles on its papillate cap.


I failed to get a photo of this next one in the field, but its knobbly spores are really its best feature. Star Pinkgill Entoloma conferendum.


Cream Pinkgill Entoloma sericellum was another memorable species, pictured here on my kitchen table (top right) with some other small cream-coloured species we encountered.

The pink-tinged gills are a feature which gives this mushroom away as being an Entoloma. I see that Læssøe & Petersen, in 'Fungi of Temperate Europe', call it Entoloma sericellum "sensu lato". So perhaps there is a species complex here?

I think those are all the grassland Entolomas I'm likely to remember from those three days of surveys, but there were others: Entoloma griseocyaneum, with a scaly cap and fibrillose stem; E. papillatum with its very papillate cap; and E. exile, with its brownish orange base.


And Entoloma sericeum, which rather exemplifies what I used to think all Entolomas were like: brown, brown, brown. 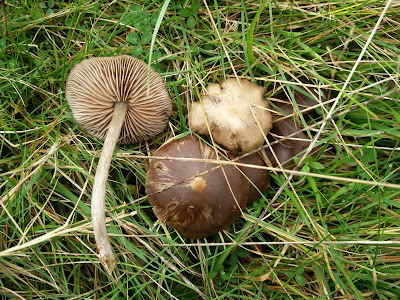 For the record
Collections from surveys with the Natural England Field Unit, 23-25 October 2019

Records to be submitted by Natural England Field Unit
Posted by Clare Blencowe at 14:00 No comments: 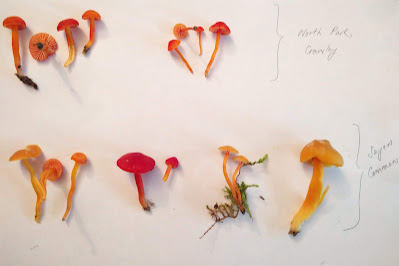 Found quite a range of reddish-orange waxcaps today, so thought I'd try running them through the ID tool.

Worth Park collection 1
Growing in short grassland near the car park. 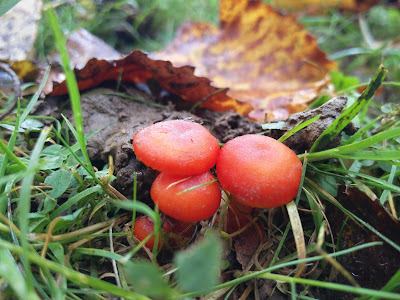 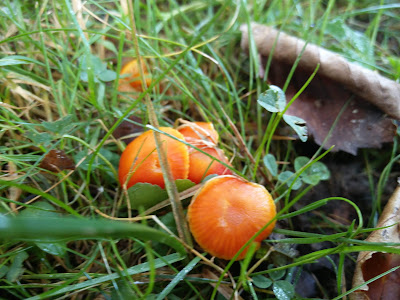 The fruit bodies were very fresh, with slippery stems. The gill attachment looked to be mostly broadly adnate, with a few gills appearing shortly decurrent. 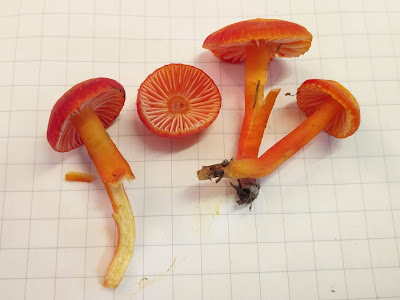 An orange-red cap, lubricous stem and broadly adnate gills gives a top answer of H. insipida in the ID tool, which was the name Nick Aplin had suggested when we found it – based on a quick look at its field characteristics.

If I'd have chosen 'viscid' for the character of the stem, I would have got H. mucronella as the top answer. Looking in Boertmann, these two species are superficially similar and easily confused. I touched the tip of my tongue to the cap to see if I could detect a bitter taste (a key feature of H. mucronella). I didn't get any taste from it, so H. insipida seems like a good call.


Worth Park collection 2
Growing in short grassland below the 'ha ha'. 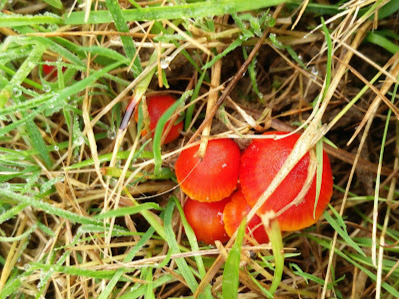 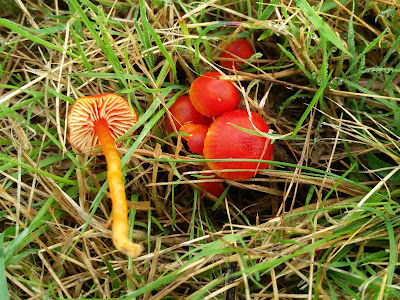 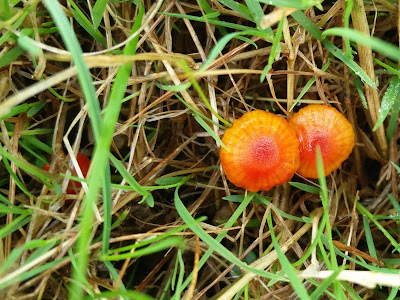 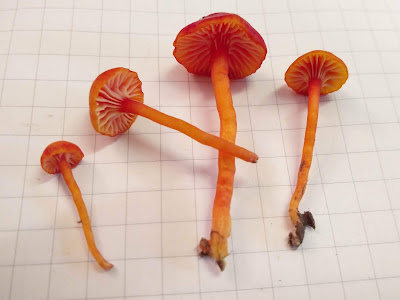 These seemed somewhat different in character to the previous collection. More slender. More obviously lubricous, with a striate cap and translucent eye at the centre. Gills decurrent. And a more reddish tone at the top of the stem.

It turns out these are all classic characteristics of Spangle Waxcap H. insipida. Boertmann does note that this species is 'very variable regarding colour and stature'. 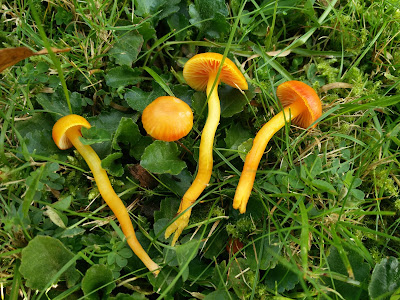 I'm inclined to think this collection with broadly adnate gills is H. insipida again. Although I neglected to accurately record the cap and stem texture when fresh. 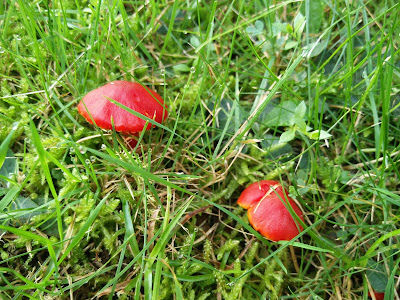 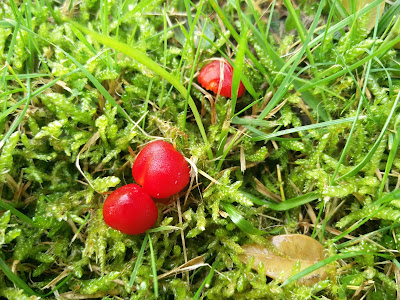 A red (scarlet) fruit body with broadly adnate gills and lubricous cap leads to a range of possible answers in the ID tool. 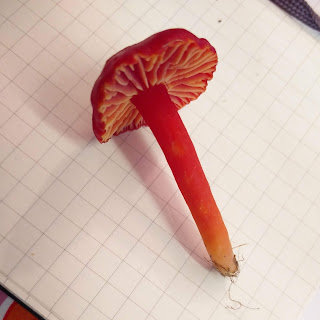 Adding that the stem is predominantly red narrows things down a bit, and then you get to judgements about the appearance of the cap... 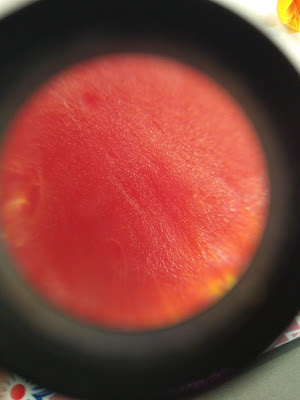 ... looking at the cap under a hand lens, I think you could describe it as 'finely veined or nodulose'. 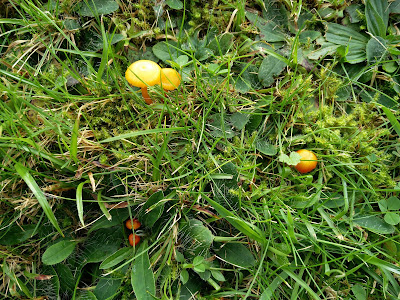 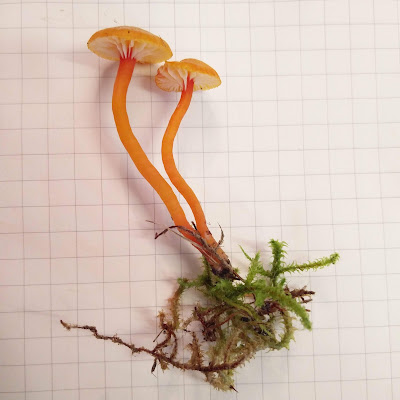 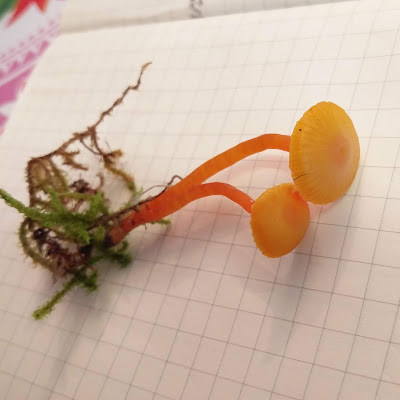 Ah, I recognise these now! 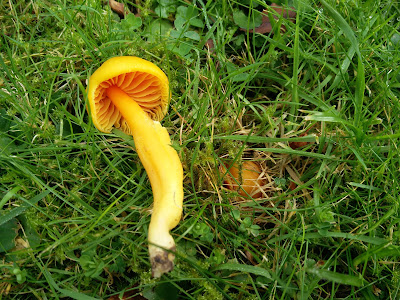 A greasy, yellow cap points towards Oily Waxcap Hygrocybe quieta. And I think I could detect the characteristic smell, described to me as being like wet laundry (if you don't know what bedbugs smell like).

The greyish sheen on the cap is typical of weathered specimens. 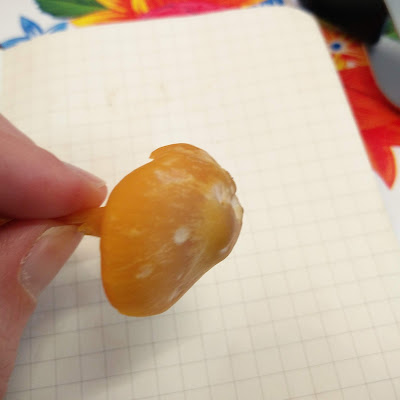 And the salmon tones to the gills are also typical. 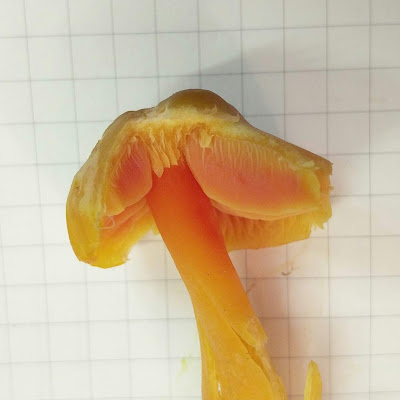 
Some bonus finds from Sayers Common