North of the border (over Bramley way)

I ventured into Surrey on Saturday, with the West Weald Fungus Recording Group, for a fungus foray at Surrey Wildlife Trust's Bonhurst Farm. It was a joint recording day and volunteers' event to celebrate 60 year's of Surrey Wildlife Trust. Happy birthday, neighborinos! 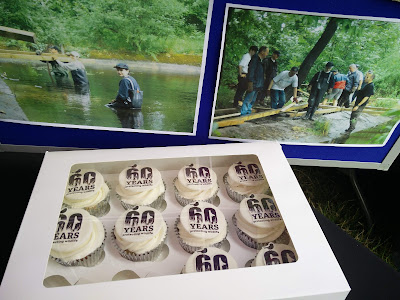 This Dwarf Mallow Malva neglecta by the registration tent produced my first species of the day... 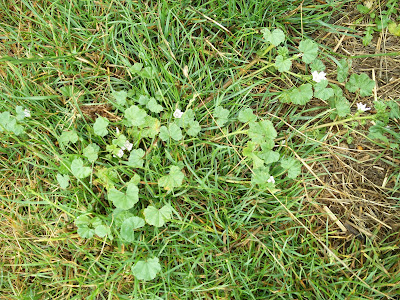 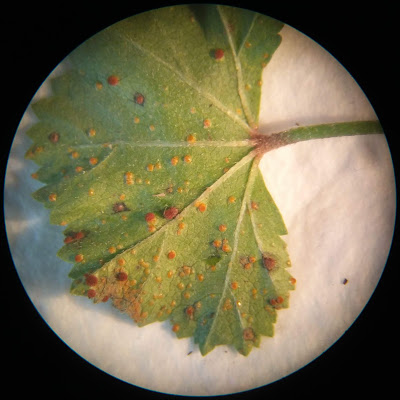 The recent rain had brought a crop of pale yellowish Agrocybe mushrooms to the sheep fields but I thought I'd let someone else ID those.


An area of wet woodland, thick with willow and elder proved quite fruitful. 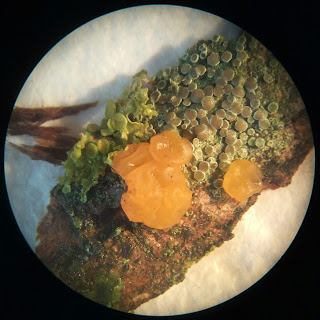 It seems to be without clamp connections, as far as I can tell, and the spores are up to 3-septate. 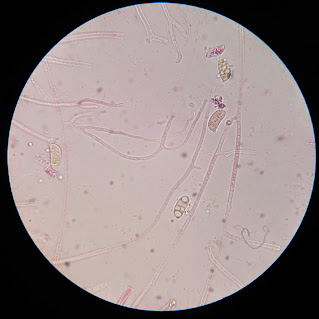 Following the key in Reid's Monograph of the British Dacrymycetales (1974) that takes me to D. stillatus. He does note that this species can occur in "large, soft gelatinous masses up to 2 cm in length."

These pale Psathyrella mushrooms were at their best, with the ragged remnants of a while veil still showing around the edge of the cap. 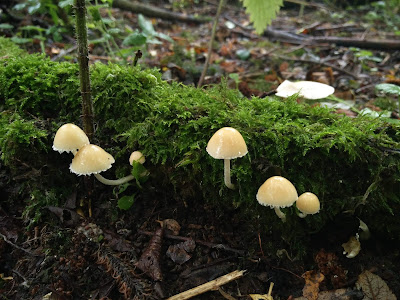 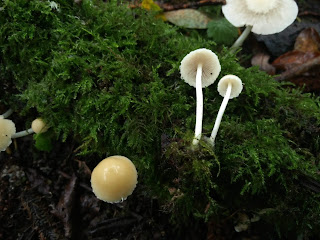 I made the spores around 7 x 4 microns and thought I could just see the shadow of a germ pore.


I could find no cystidia on the face of the gills (pleurocystidia) but lots on the gill edge (cheilocystidia).

I am lead to conclude it's Pale Brittlestem Psathyrella candolleana. (Their elegant slender form had made me think they might be something different.)

On a wet rotting branch nearby I spied some small grey 'crepidotoid' gilled mushrooms, growing in a small tiered cluster. Each one was no more than a few millimetres across. Looking closely, they all had this tufted hairy covering, towards the centre of the cap. In the older specimens the hairy part of the cap appeared darker, giving the fruit bodies a two-tone appearance. 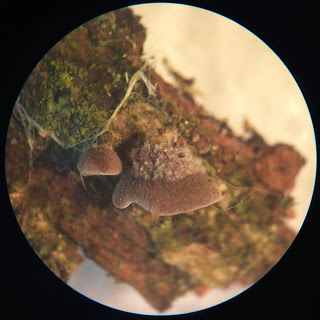 I think these must be Hairy Oysterling Resupinatus trichotis. Quite an enigmatic little thing, when you get a good look at it.


On a large rotting log, at the edge of a sunken lane, we found a big patch of Tripe Fungus Auricularia mesenterica. A nice find as I've never seen this species before. 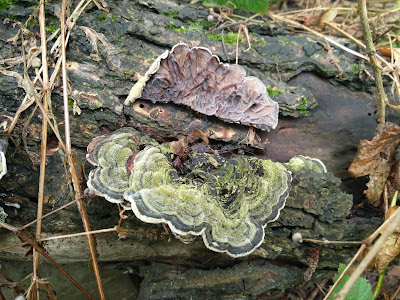 And another jelly fungus on Hazel... 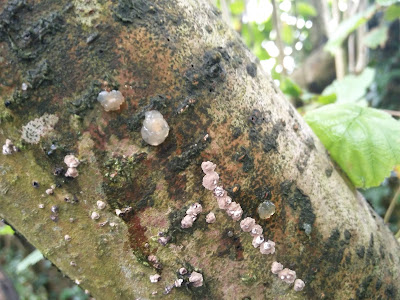 Not sure where to start with that one.

Records to be submitted via WWFRG