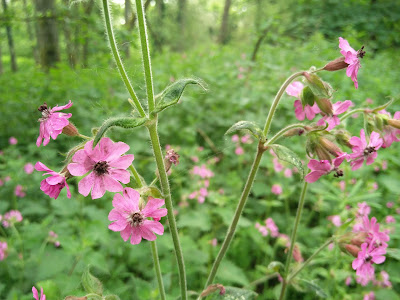 I've been taking a closer look at the Red Campion Silene dioica on my route to work, ever since I heard about Campion Anther Smut Microbotryum violaceum sensu lato (from @fungifrolics). Finally found some! On Sussex Wildlife Trust's Woods Mill nature reserve, near the willow tunnel.

What mycological madness is this, to try and wrap my head around?! This is a fungus which, having infected a host plant, proceeds to take over the plant's sexual parts for its own reproductive purposes. In the place of anthers, which would have borne pollen, the fungus causes the plant to produce a mass of dark brown spores. 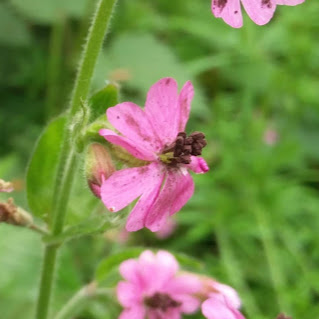 An illustrated life cycle of Microbotryum can be found in Schäfer et al (2010). Fascinating stuff!

There is also a very accessible introduction to the Microbotryum violaeum species complex on A. J. Silverside's website, here. And it seems that modern molecular studies have not yet completely succeeded in resolving the complex into a group of satisfactorily delimited species (Vánky, 2004).

I had read that the spores of Microbotryum are ornamented with a reticulate ('net-like') mesh. This prompted me to spend a few hours playing with the microscope. 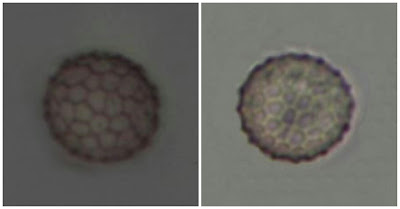 Here are a couple of spores from my Woods Mill collection. Both images were taken at 1000x magnification under oil immersion & manually focus-stacked using Helicon Focus.
Took me all evening, but I was happy to get that relatively crisp right-hand image from my 'new' microscope. It was interesting to compare with these SEM images in Denchev et al (2009).


Having been thoroughly distracted by this fungus's biology and rather attractive spores, all that remains is to put a species name to it. Spooner & Legon (2006), in their list of species in the Microbotryum violaceum complex which can be recognised in Britain, have M. lychnidis-dioicae occurring in anthers of Silene dioica. Whereas Vánky (2004), advocates using the name M. violaceum sensu lato, pending further taxonomic work. So there we go. Take your pick.

There are a whole bunch of different Microbotryum species, parasitising different plants. I think one of the most modern comprehensive treatments must by Vánky (1998) but there is also a nice list – with pictures! – in the recent 'Smut and Allied Fungi of Wales' (Woods et al, 2018). Want to find them all now!