On second thoughts, maybe I won't start getting into Mollisia 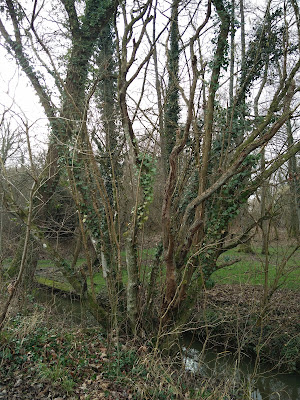 These mushrooms caught my eye the other week, growing on a decaying branch of a tree by the stream at Woods Mill. 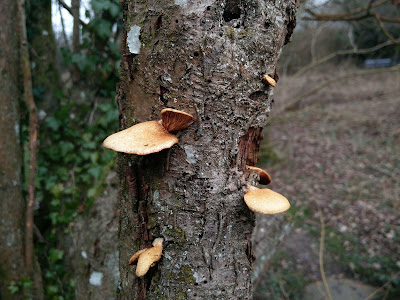 They looked oysterling-ish. But darker than the ones I usually see. 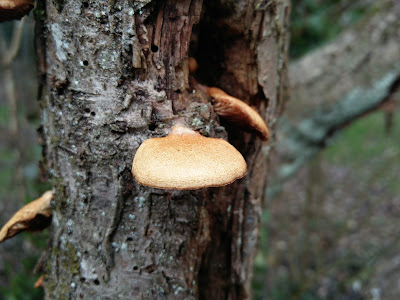 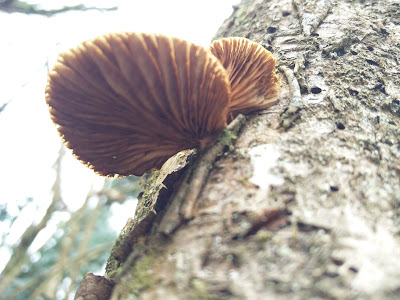 The fruit body I collected has been sat on my radiator for a couple of weeks, and I finally got around to taking a look at it today.

Masses of spores floated off my little slice of gill, mounted in ammonia.

Having been all round the houses (and through the ID books) with this one, I'm now thinking it's probably an old Peeling Oysterling Crepidotus mollis? Although it doesn't look much like the young C. mollis I've recorded before at Woods Mill. Over on the British Mycological Society Facebook Page, Richard Shotbolt has suggested it could be Crepidotus calolepsis (considered by some authors to be a variety of C. mollis) which is differentiated by its covering of minute rusty-brown scales. Hmm.

Growing with these mushrooms, in the sheltered cracks of the dead branch, I caught a glimpse of something else. Some tiny little grey discs. 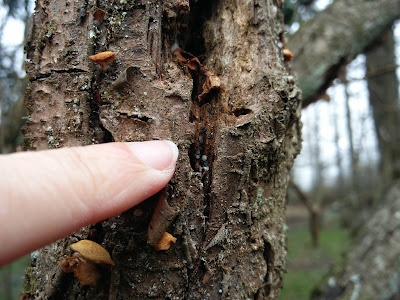 I collected a few of these yesterday. Here they are under the stereomicroscope. 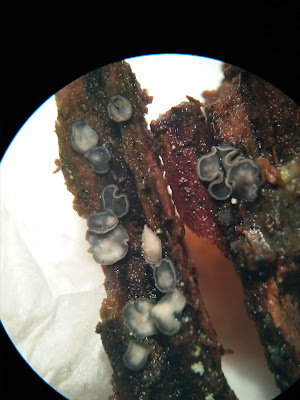 I remembered a conversation with Brian Douglas about a small grey disc fungus, which he described as 'mollisioid'. I wondered if what I have here might be a Mollisia species of some kind.

My next step was to Google 'Mollisia key', which brings up a discussion on fungi.org.uk entitled, "Mollisia - is it impossible?", which makes interesting reading, if you're considering venturing into this dark corner of mycology. The answer's kind of, "Yes, but don't let that stop you having a go."

I don't think I will be able to mount a serious identification attempt on this, as I don't have any Lugols Iodine (and after seeing this article by Hans Otto Baral on 'Iodine reaction in Ascomycetes: why is Lugol's solution superior to Melzer's reagent?', I figured it wasn't worth trying with Melzers instead). But I thought I'd have a little play anyway. See what I could see.


I can say confidently this is definitely an ascomycete, with those spores lined up in long sacs (asci).

It's got pretty long thin spores: 10-13.5 x 3-3.5 μm. And I'm thinking the contents of the paraphyses are slightly refractive. 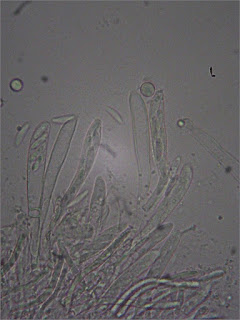 That's all I got. Hopefully I'm right on it being a Mollisia!