To Horton Wood in search of a fungi fix. Didn't see any mushrooms or brackets to write home about, but I did see something on this decaying birch log. 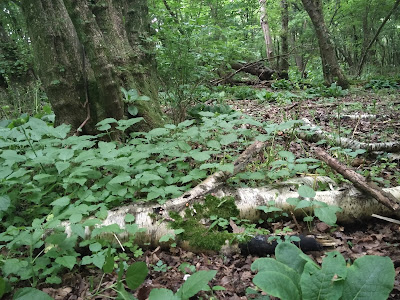 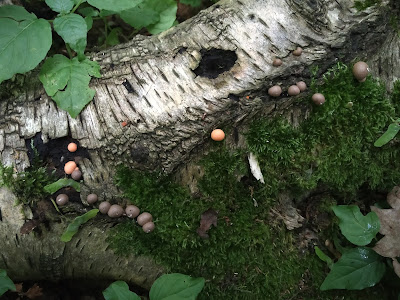 I had the Collins Complete (photographic) Guide with me so I started flicking through it and soon found a possible match: "Lycogala terrestre – plasmodium stage is a rather spherical pinkish buff ball; found on dead wood, usually in clusters". A slime mould.

The guide has just two pages on slime moulds, mentioning a few of the most frequently encountered species, so I googled "Lycogala terrestre" to see if it might be easily confused with anything else. That's when I discovered the common name of this slime mould is Wolf's Milk. And I read somewhere that the young fruiting bodies are filled with pink plasmodium, i.e. a kind of biological pink slime.

To be honest, that made me really want to poke one. So, here I am, poking it:

(I'm not the first person to upload a video of myself milking a slime mould. There's also this clip with noticeably higher production values.)

Back at home I looked up L. terrestre in my other books. The Collins (illustrated) Fungi Guide doesn't cover slime moulds, which is fair enough as slime moulds are not fungi and belong in a different kingdom entirely. Michael Jordan's Encyclopedia of Fungi does include L. terrestre, in a short section on myxomycetes, and notes it is often mistaken for L. epidendrum. But it didn't leave me too much the wiser regarding how to confidently separate the two species.

At this point I concluded I should really get my copy of The Myxomycetes of Britain and Ireland by Bruce Ing off the shelf. 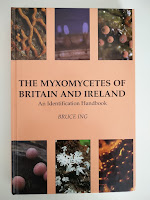 This incredibly informative tome includes keys to all the species of Britain and Ireland. But I don't use it much as it's written in very technical language which I find difficult to follow.

Again, I managed to narrow the identification down to one of these two species:
Hmm. OK. Let's take this slowly.

COLOUR OF THE PLASMODIUM – well, I think it's pretty clear from the poking footage that the plasmodium is a salmon-pink colour. Indicative of L. terrestre.

COLOUR OF THE AETHALIA (i.e. colour of the blob) – looks like they start off pink, in the plasmodium stage, and then turn grey. Indicative of L. epidendrum?

COLOUR OF THE SPORE MASS – I guess this means the colour inside the mature, grey, blobs. I had a look and they're grey all the way through (with a texture like a fine Belgian truffle). Indicative of L. epidendrum.

Well, this is confusing. It can't be both, can it?

Turns out I'm not the only one who's confused. I also found this thread where a bunch of myxomycologists are debating whether L. terrestre and L. epidendrum are really two separate species, or illustrative of natural variation within a single species.

This is where taxonomy gets fun, or frustrating, I suppose – depending on your point of view.